Banana Cake is a healthier version of the classic banana bread with whole wheat flour, and a greek yogurt cream cheese icing!

We believe in being able to have dessert while still eating healthy, and if you don’t believe us, check out our Strawberry Shortcake Poke Cake or Chocolate Walnut Cake for proof. 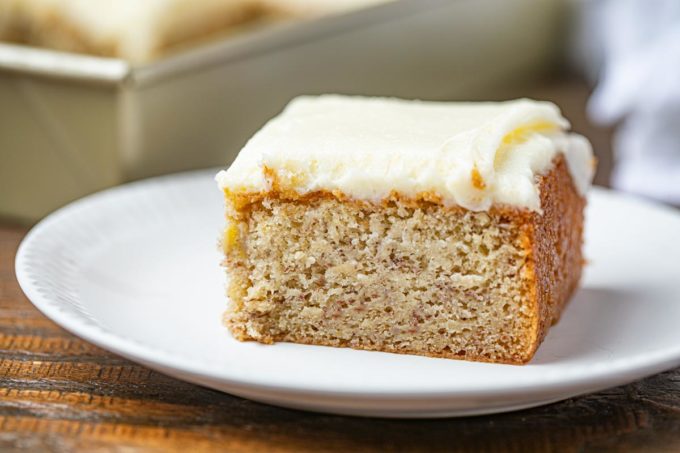 Banana cake is a moist, rich dessert that makes you feel like you’re eating something unhealthy when really you couldn’t ask for a better after-dinner treat. We aren’t saying that you should only eat cake, but after a hearty Moroccan Lentil Stew or Lemon Greek Chicken Skewer dinner, it’s nice to have a slice of cake and not feel bad about it.

If this is your first time trying banana cake instead of banana bread, you’re in for a treat. The best banana cake is the kind that’s shared with a bunch of friends or family, and this recipe makes enough to give everyone a slice (maybe, if they’re really nice to you.)

HOW TO MAKE BANANA CAKE

So you have your cake, what now? Switch the powdered sugar and icing for some of these ideas instead.

How Ripe Should the Bananas Be?

Very ripe. Really, you want overripe bananas about to go bad. This recipe is an awesome way to get rid of the bunch of bananas you swore you were going to eat for breakfast on the way to work but totally forgot about until about five minutes ago. Overripe bananas give the cake it’s rich flavor, and the ones on the bunch that are still yellow and firm don’t taste as strongly when they’re baked.

How to Ripen A Banana Quickly:

If you don’t have any ripe bananas but want to make banana bread or banana cake today, heat your oven to 350 degrees and place bananas (unpeeled) onto a lined baking sheet (I used parchment paper).

Bake the unpeeled bananas for 15-20 minutes until the outside of the bananas are blackened. The insides will be softened and perfectly ripe for this banana cake recipe or for cupcakes.

David Leibovitz, an internationally famous pastry chef and author, wrote a long intro for his own banana bread recipe, and in it he brings up some really good points about the bread vs cake question. Even Mr. Leibovitz can’t say for sure what makes this tasty banana flavored dessert a cake or bread, which makes us feel a little better about our confusion.

Banana cake isn’t just a classic American dessert, it comes in a lot of different shapes and sizes and is a beloved treat all around the world (maybe not with the same cream cheese frosting).

How To Store Banana Cake:

Our easy recipe for banana cake is sweet and delicious, and will hit the spot after a good meal! Let me know what you think of the cake in the comments if you try it! 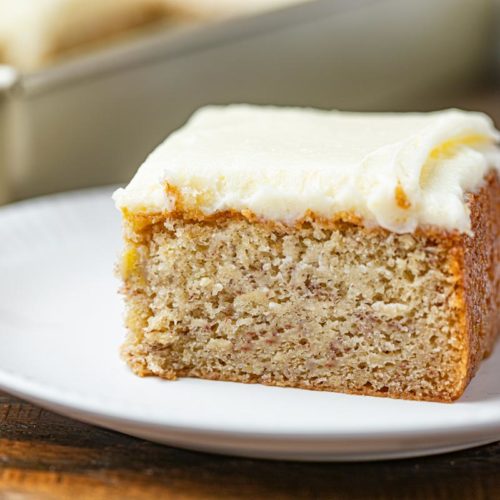